A Tale of Two Grandfathers

Nature and Nurture at Work

Everyone has a story of how they came to be. These stories are fascinating to me.

The ‘nature and nurture’ in my life are best summed up by the remarkable story of two men. Both have sadly departed this life, but their memory and legacy are a driving influence in my life, values, and work.

My two grandfathers share a fascinating legacy. These two men were both born in 1908, and, while they never knew nor met one another, they had a profound impact on my life.  They left behind a legacy that continues to touch my life and indeed the lives of millions of Sydneysiders and travellers to my beautiful harbour city home, Sydney. 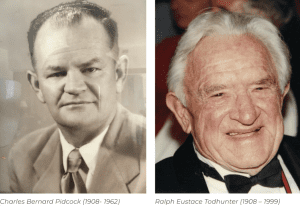 My maternal grandfather, Ralph Eustace Todhunter (1908 – 99), emigrated to Australia from America with his family in 1920. His father, William Thomas Todhunter was brought from Chicago by the Australian Government to help BHP in Newcastle build a steel manufacturing line. It was this steel that was used in the construction of the Sydney Harbour Bridge. By all reports, William was extremely adept at steel making, management, and fatherhood. His son, Ralph followed in his footsteps, becoming a Mill Superintendent at BHP for some 40 years.

My paternal Grandfather Charles Bernard Pidcock (1908 – 62), after whom I was named, was also born into a family of entrepreneurial manufacturers. While the Todhunters worked in steel, the Pidcock family was synonymous with the timber industry on the north coast of NSW, dating back to the late 1800s. Charles Bernard established Big River Timbers and led it for some 30 years before his tragic and untimely death in 1962, aged 53. The company continued as a privately-owned family business (until 2015) manufacturing formply which was used by Transfield during the construction of the Sydney Harbour Tunnel. I was lucky enough to work for Big River Timbers during the 1990s. 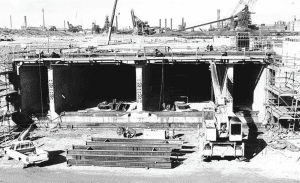 Two men, both connected through manufacturing and construction, and by the pioneering infrastructure that connected a city built on one of the world’s greatest harbours. And somehow, through a weird cosmic coincidence, both connected to me by blood. I marvel at the freaky serendipity each time I drive over or under the harbour, that these two grandfathers helped connect the city – in 1932 with a bridge made of steel, and then two generations later with a tunnel formed with timber in 1992. Construction and manufacturing may seem like tough industries, but I think of these men with a fondness that sometimes overwhelms me.

I was fortunate to be able to spend a good deal of time with Ralph growing up (I wish it could have been more). Unfortunately, I never met Charles Bernard as he passed away before I was born. I am proud to bear his name (although I was spooked when I first saw his headstone with my name on it), and I am grateful to him though I’ll never be able to tell him.

Many conversations I had with Ralph have stayed with me. He was ‘Pop’ to his 28 grandchildren. His ideas and actions nurtured me big time, in particular, his interest in learning and expanding his mind, even as a very old man. He gifted me with a passion for life-long learning which has formed the foundation for my work as a coach and trainer. He also instilled in me the importance of human connection which I see as a key part of what I teach.

Charles Bernard’s gift was more than just nature (my DNA). I never met him but I feel profoundly connected to him. It’s hard to express in words, but I know I share much of his character and I often sense him inside me, encouraging me, willing me to have a crack and give it my best. 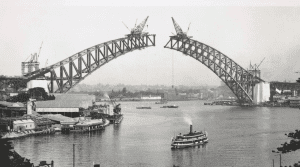 The Sydney Harbour Bridge is a mighty feat of engineering design and construction, not to mention an iconic crowning centrepiece over the sparkling harbour, a symbol as synonymous with Australia as the Eiffel Tower is for France or the Statue of Liberty for America. Built over eight years, from 1925 until it was opened in 1932, it was considered the epitome of modern bridge design and engineering ingenuity. Construction was a massive undertaking, considering its sheer size and weight in steel (52,800 tonnes of steel to be precise).  Half a million pieces of steel were secured by six million red-hot rivets, which were thrown to rivet catchers who then hammered each one by hand. Today, some ninety years later, I doubt any of the 250,000 commuters who cross the bridge would spare a thought for the daring innovation, technology and people who created it.

The Sydney Harbour Tunnel, sitting on the harbour floor, was just as audacious in its design and construction. It was equally transformative in opening and connecting the city when it opened in 1992.

I feel very connected to my family tradition of building things that last and connect people – only in my profession this is about building people and performance, which is transformative in itself. Every single time I cross the bridge or the tunnel, I think of both men with gratitude – for instilling me with a sense of connection, inspiring entrepreneurialism, and curiosity. I wonder how I (or my children) could possibly be involved in the next couple of crossings of the beautiful Sydney Harbour.